When most people talk about survival skills, the conversation centers around wilderness survival. How to build shelters, how to start fires without matches, what survival gear is most useful, topics of that nature.

And those are all worthy skills. But in practice, you’re far more likely to find yourself in an urban survival situation than a wilderness one.

Problems can crop up even in situations that fall far short of all-out economic collapse. For a relatively low-key real life example, look no further than the COVID-19 shutdown of 2020. With the world economy disrupted, supply shortages and pockets of unrest cropped up in short order. Similarly, during a natural disaster the situation in an urban environment can deteriorate into a survival scenario.

Even if you don’t live in a big city yourself, you never know when you might have to survive urban upheaval when you’re away from home. So you should develop the proper skills and learn what preparation is necessary for surviving whatever may come. With that in mind, let’s take a closer look at the idea of urban survival, and some key survival tips.

What Is Urban Survival?

In any survival situation, you have the same set of basic priorities that you need to check off. Food, water, shelter, fire, first aid, and all the other things that make the critical difference between life and death . Hence why wilderness survival is all about learning to get by in an environment where we’re deprived of the modern conveniences we could normally rely on.

Somewhat ironically, trying to survive a prolonged crisis in a remote, wild location is usually easier than doing the same in an urban or suburban environment.

In the wilderness, you at least have nature’s bounty to survive on. Not so in an urban environment. Once power and water utilities fail, transit systems shut down, and supplies run out, all the concrete and steel that a modern city runs become little better than a wasteland.

And don’t forget that you have to account for the other people you’re facing this situation with. In the wilderness, you only need to worry about yourself and whatever party you may be with. In an urban emergency, you could be stuck with millions of people all fighting for their own survival. And you can bet that relatively few will have an urban survival bag stuffed with emergency supplies, like those included in our get home bag list.

The urban survivalist, then, is a person who plans and prepares for these possibilities.

What Does Urban Survival Entail?

To a large degree, you know what to expect from a wilderness survival scenario. An urban survival situation is characterized by its unpredictability.

According to a survey commissioned by the Ad Council, only 17% of Americans claim to be prepared to survive a crisis. Even if you count yourself among that 17%, you can plan on the other 83% making their lack of survival gear and food supplies everyone else’s problem when disaster strikes.

At the same time, the possibility of a crisis in a major urban setting lasting for extended periods is becoming less of a theoretical prospect and more of an eventuality. We’re already seeing hints of things to come.

In New York, heavy rains cause massive sections of the city’s public transit system to flood. In central Texas, power outages and bitter winters left millions of homes and businesses in the cold. And nationwide, social and political tensions frequently boil over into the streets.

Depending on where you live, some of these possibilities are likely to pose a more immediate threat to you than others. But having a working knowledge of how to respond to any situation and what kind of survival gear to keep in your urban survival bag or edc backpack that will put you in the best-possible position no matter the circumstances. That preparedness is the objective of urban survival.

The Unique Challenge It Imposes

The greatest challenge in urban survival is that you’re stuck in a situation with thousands or even millions of other people. Assuming a major emergency, social order can disintegrate quickly. Should that happen, self-defense becomes an immediate concern.

You unfortunately can’t rely on law enforcement for your safety in an emergency.

For one thing, the loss of power or cell service could make contacting them outright impossible. And even if cell phones or other communication devices are working and you can get through, they can only respond to a crime after it’s happened even at the best of times. And considering that an emergency won’t be the best of times, they’re likely to be too preoccupied trying to restore or maintain order to respond to every call they receive.

In a disaster, your safety is your own responsibility. To that end, there are two main considerations that you need to attend to.

The immediate one is some means of defense. Look up what self-defense implements are legal in your locale and prepare yourself as well as you are able.

But you don’t want it to come to that. Should the situation deteriorate to the point that staying put becomes untenable, you want to have a plan to evacuate the area.

You have to think, if you had the sense to prepare for a disaster and those around you did not, your survival gear, food, and other resources might become a tempting target for desperate individuals. Removing yourself from the situation is often the best survival strategy you can employ.

Strong storms and blizzards, earthquakes, or other natural disasters may be mild enough that they only cause a few days of disruption. In these cases, trying to evacuate after the fact may not be the best course of action as plenty of other people are likely to have the same idea. But if it becomes clear that you have to abandon your established urban survival site, you want to already have a plan to extricate yourself and anyone you may be traveling with.

First, establish rendevous points ahead of time in the event that you’re separated from other members of your party.

Monitor the situation as best as you can to determine from one moment to the next whether it’s best to hunker down or bug out. Having a way to tune in to NOAA Weather Radio All Hazards or the Emergency Broadcast System as needed is essential for this.

In either case, you want to minimize your contact with people outside your group as much as possible. If you’re staying put, this means having a stockpile of supplies prepared so you don’t have to go out searching for more. If you have to evacuate, it means planning and timing your move as best as possible to avoid crowds and chokepoints.

And don’t forget about having access to a portable source of power to recharge your cell phones, weather radio, and other lifesaving or essential electronics.

Rechargeable battery packs portable power stations are a start. However, recharging them can be a challenge during a blackout.

That’s why I recommend that you check out this article about choosing the best solar generator for off-grid living. That way, even if the power goes out, you’ll always have access to a renewable source of energy… the sun!

Success or failure in any survival situation often hinges on preparedness. And in an urban survival event, a big part of that preparation involves being aware of the area and taking in the lay of the land as much as possible.

In your hometown or city, you should be as familiar with your home turf as possible. Something as simple as taking different routes to work from time to time is a way to help familiarize yourself with the city, find shortcuts, and be prepared to find alternate ways around town should the need arise.

While you’re doing this, keep an eye out for resources that you can use in an emergency.

Clean water, for example, is one of your first priorities in any situation.

It may not be practical to carry all the water you need, so keep an eye out for outdoor spigots attached to buildings that you can access from the street. You can buy a tool called a sillcock key from any hardware store for about $15. With one of those in your survival kit, you should be able to access any common water spigot you can find.

In an emergency, it can take the federal government as long as 72 hours to mobilize a response. In the interim, you can only count on yourself for all of your essentials. Whether you’re staying put or bugging out, there are a few supplies you can’t do without.

Water is your first priority. If you’re staying put, you should have a minimum of one gallon per person per day in your stockpile. If you’re on the move, the aforementioned sillcock key can be a lifesaver, as well as a water purification system if the municipal supply fails and you have to rely on found water.

After water, having food rations for at least a few days should be the next item on your checklist, followed by first aid supplies. And whether you’re hunkering down or not, you want the means to start a fire with a survival tool like the Uberleben Zunden ferro rod, both for warmth in the wintertime and for boiling water if need be. At least have a mylar blanket on hand for some shelter from the elements.

If packing spare clothing, keep in mind that dark colors are good camouflage in an urban setting.

Urban survival is about more than surviving through a disaster until aid arives. It’s about having the ability to protect your interests under any circumstances.

With the right tools and skills, you can approach any situation you become involved in with the confidence and mindset that you need to protect not only your own life but also your loved ones.

These skills will serve you particularly well in a bug-out scenario, as you work to make your way out of a city to safer pastures. And should that situation arise, be sure that your bug-out bag is equipped with the right tools, like the everstryke pro survival lighter, to meet the task. 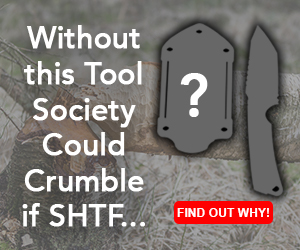 Check out this combination Ferro Rod and Permanent Match... It's Free!

Manage Cookie Consent
To provide the best experiences, we use technologies like cookies to store and/or access device information. Consenting to these technologies will allow us to process data such as browsing behavior or unique IDs on this site. Not consenting or withdrawing consent, may adversely affect certain features and functions.
Manage options Manage services Manage vendors Read more about these purposes
View preferences
{title} {title} {title}