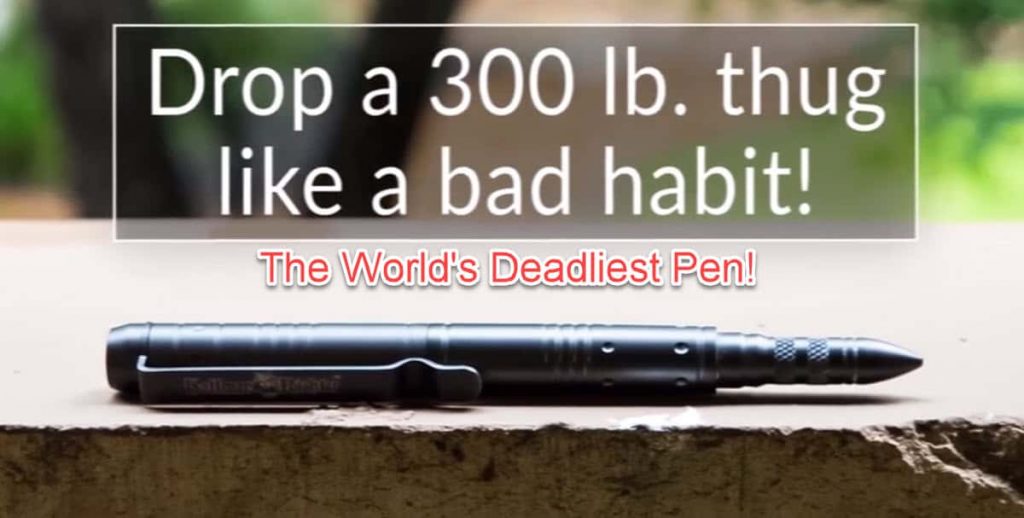 A tactical pen is a must-have for anyone who wants to build up their easy to carry survival gear for self defense. While it would probably never be chosen over a knife or a gun for defending yourself, it’s still a valuable self-defense tool to have in your arsenal.

Plus, you can use it to write!

What Is A Tactical Pen?

At first glance, the tactical pen is the same as any other writing device. It’s a purely functional pen, but it’s also a tool built for self-defense based on the Kubotan.

The end opposite the writing end is a hardened tip made of metal. In most cases, one side of the tip is blunt, designed to be used to apply pressure or deal a great amount of force behind a strike. The other end is usually more pointed, built to rake, pierce, and even to break glass when necessary.

The tactical pen is a self-defense tool hidden in plain sight, especially useful for when other alternatives like tactical knives and pepper spray aren’t available. They are often built to be just as formidable when it comes to writing, too, often coming with waterproof and fireproof ink cartridges.

How To Use A Tactical Pen

How to use a tactical pen for self defense depends on the situation you find yourself in.

It can be used as a blunt force instrument, able to deliver a lot of pain thanks to its force and weight, and some also have a sharper edge on the other side. The blunt end can also be used to apply sustained pressure thanks to a ridged grip that makes it easier to keep hold of no matter how much force you wield.

Flipping it over, it can be used like a knife to rake, slice, and jab an attacker. Tactical pen use requires a lot of care to use, as it is capable of doing a lot more damage than expected if you’re reckless in its use.

Features You Want In A Tactical Pen

Here are some of the most important features to the practicality and quality of a tactical self defense pen:

However, not all tactical pens are created equal. There are dozens of defense pens on the market, and not all of them deserve the name.

To find the best tactical pen for self defense, you need to know what qualities you should look for. We’ve rounded up the top six features you look for when you buy a tactical pen.

Whether you’re using your pen to take notes in the field or as a self defense pen to fend off an attacker, you want to buy a pen that has a great grip. The last thing you want is for your self-defense mechanism to literally slip through your fingers.

For easier writing, look for pens that have knurling around the grip. For a pen that’s easily held while throwing a punch, look for something with a checkered texture. It’ll create more friction, which helps keep it in place in your hand.

You obviously don’t want to have a tactical pen that’s flimsy and threatens to crumple when any kind of force is applied.

Instead, make sure your tactical pen is made of materials like aluminum, titanium, or steel. These metals are lightweight, so the pen won’t feel like a stone in your pocket, but durable enough to do some damage if necessary.

That combination is what makes the best tactical pen, like the Hoffman Richter Stinger “spy pen”, which is machined out of a block of aircraft grade aluminum and coated with titanium matte black finish makes it a great everyday carry for your bug out bag.

Tactical pens are also used for writing in out of the ordinary conditions. The best pens can write in extreme heat, extreme cold, and even upside down.

You want to make sure that your pen will still function if you have to write in the rain and it gets a little wet. Where other pens would fail, your tactical pen should succeed.

This is one feature that really makes certain survival tactical pens stand out from the rest. The absolute best tactical pens have glass breaker tips. This makes them great tools in emergencies as well as self defense situations.

Glass-breaker tips (like those on a seatbelt cutter) have saved lives in situations like car accidents, where a driver might have otherwise drowned in a car submerged in a river. Carrying a pen like this will help make sure you never feel trapped, no matter what.

The best tactical pen should be able to do double duty and write well. After all, this should hopefully be the main function of the pen. So, don’t be afraid to use it to put together your must have list of  free survival gear.

Choose a pen that has easily refillable ink cartridges and can write whatever situation you happen to be in. Even if you never use it in self defense, you’ll have a great pen.

The best practical tactical pen is the one that looks like an ordinary pen, complete with a pocket clip (which makes  it perfect for everyday carry) and ink cartridges so it can be used as a writing instrument, yet can still be used as a defensive weapon should the need arise in an emergency situation.

One of the most important features of this UZI-TACPEN2 glass breaker pen is the anodized aluminum tip. Aluminum is a great material because it doesn’t bend, deform or break easily, and when it’s anodized, it’s even harder, meaning it can deliver the force you need in a fight-or-flight situation. Highly sturdy, with a good grip, it also has a glass breaker for emergency escapes. The pen requires a few twists to unscrew but that’s a minor inconvenience. The pocket clip is strong, too, but its sharp edge can be tough on your clothes so it might be worth filing it down. The main benefits and features of the best-selling Uzi Tactical Pen include:

Built for those who want to endure all climates, this Gerber Impromptu Tactical Pen has weatherproof cartridges designed to work in all conditions. The glass breaker tip is made of tempered steel, making it highly resistant to corrosion and abrasions. It’s a solid pen with a good grip and a resilient yet convenient clip. However, many users do experience issues with the click mechanism that extends the pen. Made in the US, the Gerber Tactical Pen offers a host of benefits, including:

Made of highly durable aluminum, this pen has an easily removed screw-off top that screws on and off the pen. This acts as the blunt end, fastened with three screws, while the other end is pointed, acting perfectly as a glass breaker. The grip is overall decent; however, it doesn’t have the best grooves below the tip of the pen so it’s less effective for writing than it is for self-defense. Smith and Wesson is a global brand, which has established a reputation for producing high-quality weapons and firearms that are used by military personnel, hunters and police forces. As you would expect, the range of tactical pens offers an array of benefits and features for those keen to enjoy peace of mind without carrying a more powerful weapon. The Smith and Wesson Tactical Pen features:

Another aluminum pen, with a blunt screw-off top over the writing tip and a pointed self-defense end. It has a very tight, secure clip and is one of the most unsuspecting looking pens in the whole list. However, there are some reported issues with the cap. In some cases, it twists off on its own while moving in the pocket, but it can also be tough to twist off when you want it to, so it may require some graphite lube to keep it practical. Made from high-grade aluminium, the Schrade Tactical Pen is a great all-rounder, which boasts the following features:

These pens come in a variety of materials, including anodized aluminum and titanium, so you have the choice between a stronger self-defense end and greater corrosion resistance, respectively. They have an excellent grip, a very strong O-ring pressure clip, and high-quality Fisher Space pen ink cartridges. The only real concern is that they aren’t very unassuming. It’s not difficult to see it’s a self-defense tool at a glance. Produced in the US, Benchmade tactical pens are among the toughest products on the market. Featuring an aluminium body with a stainless steel clip, this is a pen that appears more weapon-like than some of the other leading contenders. The main benefits on offer include:

The diamond-thread grip on this pen is one of the most ergonomic and functional in the whole list. This aircraft aluminum pen is remarkably lightweight, but with a very strong carbide tip on the glass breaker end. However, some users do note problems with the pen tip not unscrewing, making it perhaps less reliable as a pen, though that doesn’t affect its self-defense utility. ABP is a renowned supplier of survival tools and equipment, and as such, it’s no surprise that the ABP tactical pen is used widely by the military, police and survival specialists. The pen features:

A highly-sleek design with weather-resistant ink cartridges and anodized aluminum tips, this pen is particularly small and slim, making it perfect for keeping it hidden in a potentially dangerous situation. It’s incredibly solid with a strong clip. The grip, however, is not as effectively ridged as the other pens, so it may be less reliable if your hands are overly sweaty or dirty. The Columbia River Knife & Tool (CRKT) tactical pen is a great choice for those looking for a more subtle design. It offers:

With a core of hand-machined aluminum coated in titanium, this pen has all the strength and durability of aluminum with the corrosion-resistance of titanium, making it the best of both worlds. It’s highly rugged, with a great grip and a well-designed beveled end. However, that end that isn’t particularly sharp and is slightly less capable of breaking glass. The Hoffman Richter tactical pen offers the best of both worlds. It is strong and resilient, but it’s also smooth and light when it comes to civilian use. This pen features:

What Makes The The Hoffman Richter Stinger Spy Pen The Best Tactical Pen For You, See For Yourself… 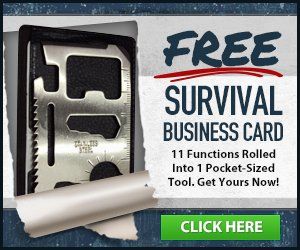