If you’re a hardcore survivalist, you may believe you have no need for the best tactical flashlight money can buy.

In fact, you might believe you don’t need a flashlight at all. And maybe you don’t.

While that’s certainly your right, there’s something strangely comforting about having light when you’re out in the wilderness or in your hand while your searching your home for an intruder at 3 am.

Oh yeah. It’s that whole being able to see things in the dark thing.

So if you don’t want to be in the dark on how to choose the best tactical flashlight, you’ll want to read this.

There are a number of factors you’ll want to consider in your search for the best tactical flashlight.

Features To Look For In The Best Tactical Flashlight

Light output is measured in lumens and the best tactical flashlight needs plenty of lumen-power to temporarily blind your attacker, or to light the way safety on a dark rainy night.

When searching for the best tactical flashlight for your needs, you may see different lumen measurements based on different settings.

This highest number will be the measure of the light intensity coming out of the flashlight while on the highest brightness setting and powered by new batteries. This is the most important number.

Keep in mind that beam intensity, distance, and type will all influence the effectiveness of tactical flashlights in different applications.

Light output typically ranges from a book-reading 20 lumens, a tiny 200o lumen tactical flashlight, to a lighting-up-a-city-block 3500 lumens (that’s more than enough to blind the daylights out of any would-be attacker.

On a side note: I used to think that a smaller tactical LED flashlight could never outshine my trusty 4 D-cell krypton-bulb Maglite but man, was I wrong. I bought a couple of smaller ones a few years ago and they are insanely bright! In fact, my trusty old krypton maglites are now gathering dust in long-term “garage duty” storage.

Here’s a 300 lumen Free Hybeam Tactical Flashlight that is insanely bright, runs on a single AA battery, has a military-grade YAG led, crafted from aircraft grade aluminum so it only weighs 2 ounces and is 100% Free! 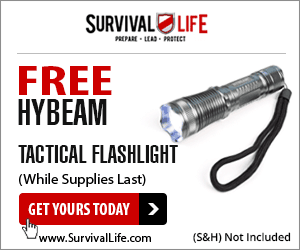 Please keep in mind that although I will recommend several free tactical led flashlights in this article, this blog is supported by affiliate promotions and advertisements. So I may earn a commission if you order a tactical flashlight based on my recommendation.

If you’ve ever found yourself out in the woods at night, far away from any lights and drenched in the light of a full moon, it’s pretty amazing how bright it is.

The beam distance for flashlights is the measure (in meters) of how far the light will shine before the brightness diminishes to the equivalent of the light from a full moon.

When searching for the best tactical flashlight, you should look for one with at least 250 lumens or more.

The run time is determined by how long it takes for the light output to drop to 10% of the rated output when the flashlight has new batteries. This number is rounded to the nearest quarter hour.

It’s important to remember that depending on the flashlight, output may gradually decrease over time, or it will remain largely constant and then suddenly decrease.

Run time is usually given for each light setting.

This measurement is represented in meters.

Flashlights are tested by dropping them 6 times onto concrete at the rated distance. Thus, the testing is for the purpose of ensuring that the light doesn’t fizzle out after occasional accidental drops.

It is not a measurement, however, of how well the flashlight will function after being run over, struck with an object, or being used to strike other objects.

What happens if you drop your flashlight in the water, or you need to use it in a downpour? Will it still work?

There are three ratings that are commonly used to measure just how waterproof even the best tactical flashlight will be.

Price is often in direct correlation with quality. But not always.

So don’t be fooled into thinking that the most expensive one will necessarily be the best tactical flashlight for you to own.

Do your research before you buy.

Check online reviews and consult with others who have actually used the flashlights. That way you can figure out the pros and cons for yourself.

And while you are at it…

Don’t forget to check out the Free Hybeam Tactical Flashlight I mentioned earlier, and its little brother, the Hybeam Microlight. The Hybeam Mircolight is waterproof, made with aircraft grade aluminum, and comes with A Lifetime Warranty.

Better yet, the Hybeam Mircolight only costs a penny as part of this special promotion! 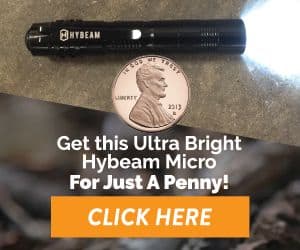 Please keep in mind that this blog is supported by affiliate promotions and/or advertisements. So I may earn a commission if you order a tactical flashlight based on my recommendation.

If you have any other tips on how to choose the best tactical flashlight, drop us a comment below! 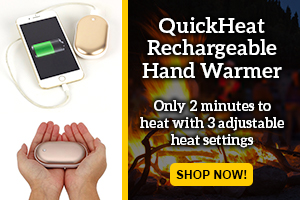 Check out this combination Ferro Rod and Permanent Match... It's Free!